Professor James Van Allen in his office on the UI campus in Iowa City, Iowa, May 2004. Photo by Tom Jorgensen, University of Iowa Office of University Relations.

Born in Mt. Pleasant, Iowa, in 1914, James A. Van Allen attended public schools there and graduated from Iowa Wesleyan College with a major in physics in 1935. He earned an M.S. degree in solid state physics (1936) and a Ph.D. degree in nuclear physics (1939), both at the University of Iowa. He then became a research fellow at the Carnegie Institution of Washington (DC) and a physicist at the Applied Physics Laboratory of Johns Hopkins University. During World War II he served as an ordnance and gunnery officer in the South Pacific Fleet of the U.S. Navy. He returned to APL/JHU in 1945 and led a research group in the utilization of high-performance rockets for scientific measurements within and above the Earth's atmosphere.

In 1951 Van Allen was appointed professor of physics and Head of the Department of Physics (and Astronomy after 1959) at the University of Iowa. He originated and supervised a program for using balloons and balloon-launched rockets (rockoons) for high-altitude measurements of cosmic rays and magnetic fields ranging from the Arctic to the Antarctic. He helped plan the International Geophysical Year (1957-58). The first successful American satellite, Explorer I (launched on 1 February 1958, carried his Iowa cosmic ray instrument. The observations with that instrument yielded the discovery of the radiation belt of Earth.

Since that date, he and his associates at the University of Iowa have flown instruments on rockets, satellites of Earth, and planetary spacecraft including the first missions to the planets Venus, Mars, Jupiter, Saturn, Uranus, and Neptune. They have made many discoveries and have contributed an important segment of the world's knowledge of energetic particles, plasmas and radio waves throughout the solar system and even into the interstellar medium.

About Van Allen's Life and Achievements

The Start of the American Space Age

Van Allen led many spaceflight missions to explore our solar system and beyond. 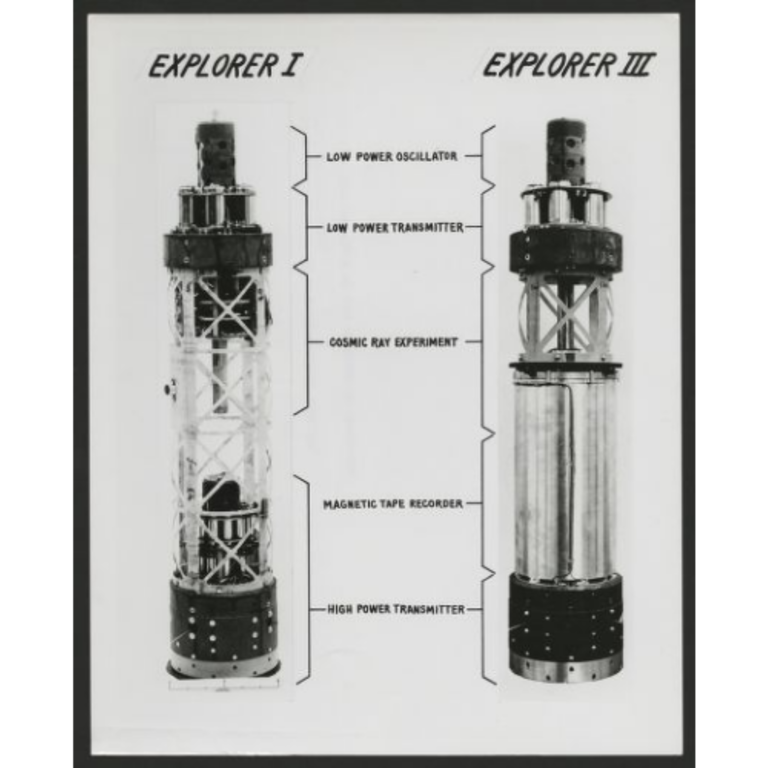 This collection in the Iowa Digital Library chronicles the professional career in upper atmosphere research, space physics research, and academia of Dr. James Van Allen. It documents how the shifting research trends affected the career of one scientist. This substantial collection includes many papers photos, notebooks, videos created or consolidated by Dr. Van Allen

See also the James A. Van Allen Papers collection at the University of Iowa Archives, detailing the contents of physical records in the collection and an article by curator Christine D. Halas. 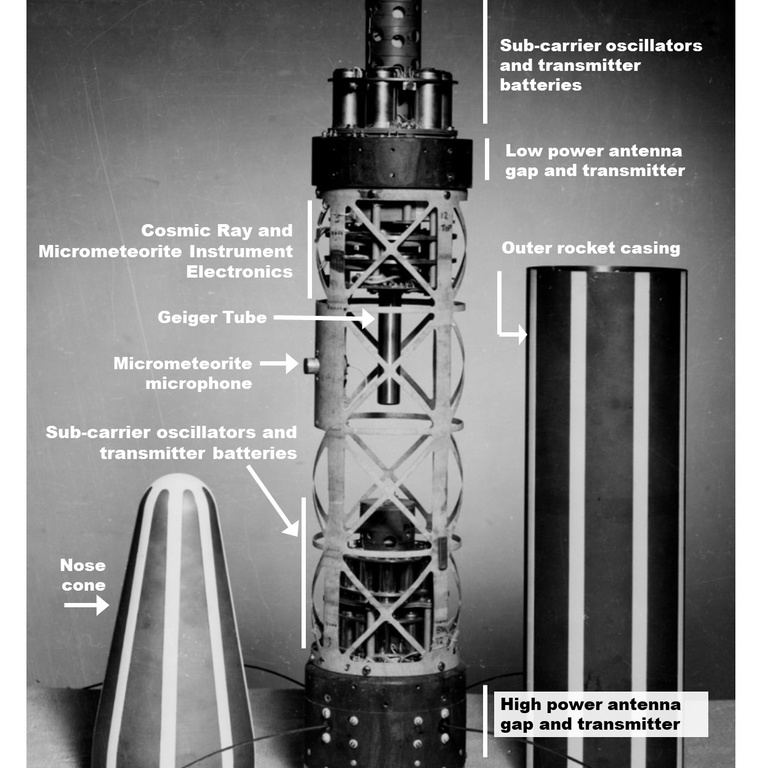 Explorer 1 was the first U.S. Earth satellite launched Jan. 31, 1958, which began six decades of groundbreaking scientific discovery that continues to this day. Learn more from resources from NASA/JPL and the University of Iowa Libraries. 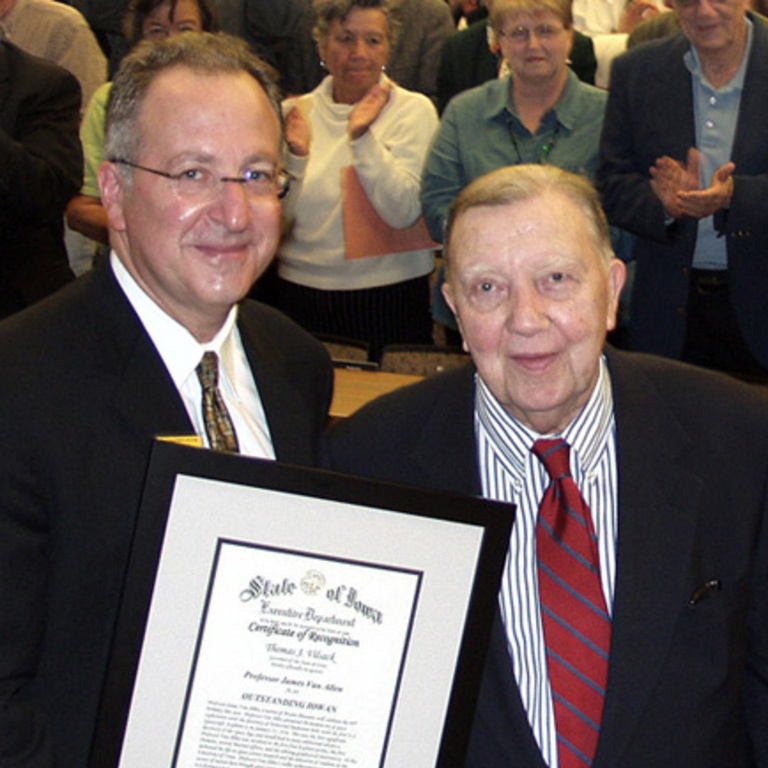 On Saturday, October 9, 2004, The University of Iowa and the University of Iowa Alumni Association hosted a celebration to honor Prof. James Van Allen and his many accomplishments, and in recognition of his 90th birthday. Activities included an invited lecture series, a public lecture followed by a cake & punch reception, and an evening banquet. 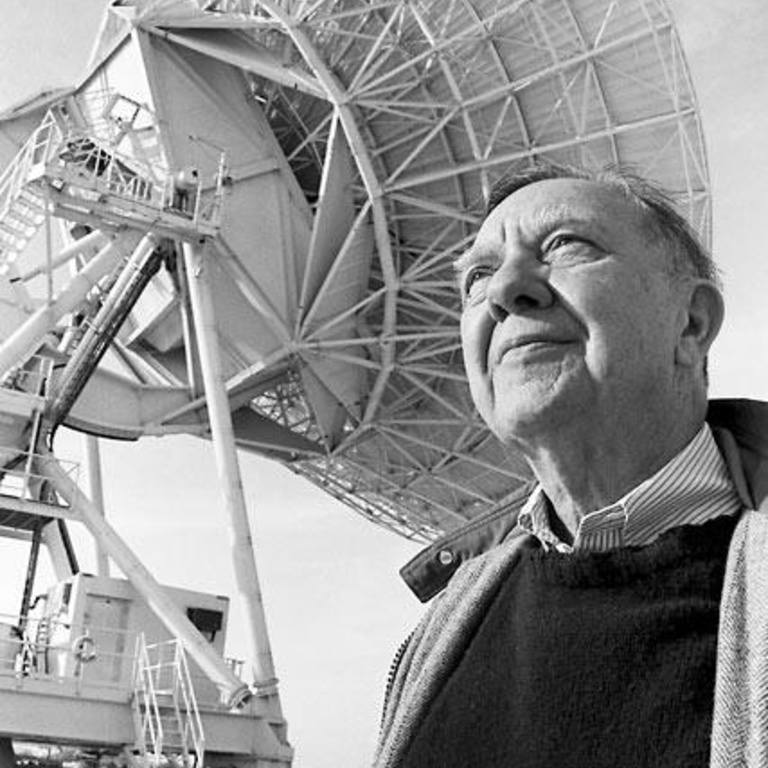 James Van Allen died Aug. 9, 2006 at the age of 91.  A memorial service was held on Sept. 10, 2006, at Hancher Auditorium in Iowa City. Many obituaries and tributes were written about this pioneering astrophysicist from Mt. Pleasant, Iowa.

Sixty Years of Space Research at Iowa:
The Legacy of James A. Van Allen

Prof. Don Gurnett gave this presentation at the Iowa City Foreign Relations Council in celebration of the 60th anniversary of the launch of Explorer 1, the first U.S. spacecraft, and the discovery of Earth's radiation belts by James A. Van Allen. The talk describes the events leading up to the discovery of Earth's radiation belts and will describe the tremendous expansion of space research at Iowa over the next 60 years, including the construction of seven successful Earth-orbiting spacecraft and instrumentation on some seventy spacecraft, including such famous planetary missions as the Voyagers 1 and 2 flights to the outer planets, the Galileo orbiter of Jupiter, and the Cassini orbiter of Saturn.

Over the course of his career, Van Allen provided energetic charged particle detectors for 20 spacecraft projects, including the first flights to the planets Venus, Mars, Jupiter and Saturn. Using University of Iowa instruments on the Pioneer 10 and 11 spacecraft, Van Allen was the first to show that Jupiter and Saturn had intense radiation belts and large extended magnetospheres. Even after retirement in 1985, he remained active in his research. As the Pioneer 10 and 11 spacecraft proceeded outward toward interstellar space after their encounters with Jupiter and Saturn, he made the first measurements of the Radial variation in the cosmic ray intensity with the distance from the Sun. These measurements provided crucial insight into the entry of cosmic rays into the solar system, a topic that he continued to study until the time of his death at age 91. 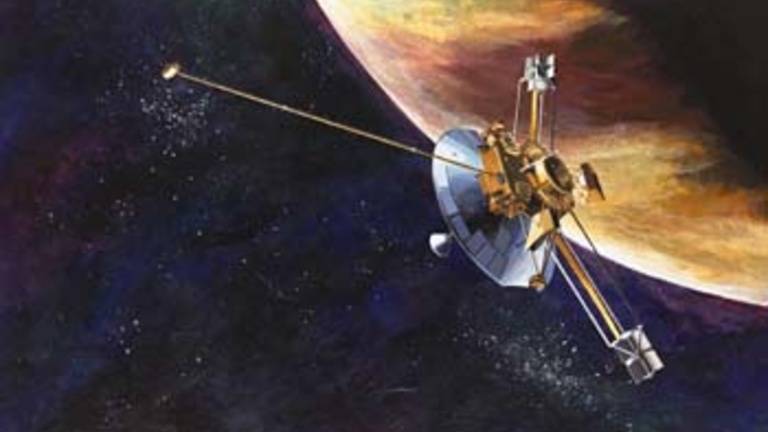 Pioneer 10, launched in 1972, and Pioneer 11, launched in 1973, carried instruments built at the University of Iowa. They passed through the asteroid belt between Mars and Jupiter without damage, made the first-ever investigations at close range of the great outer planets Jupiter and Saturn and are now on escape trajectories out of the solar system. 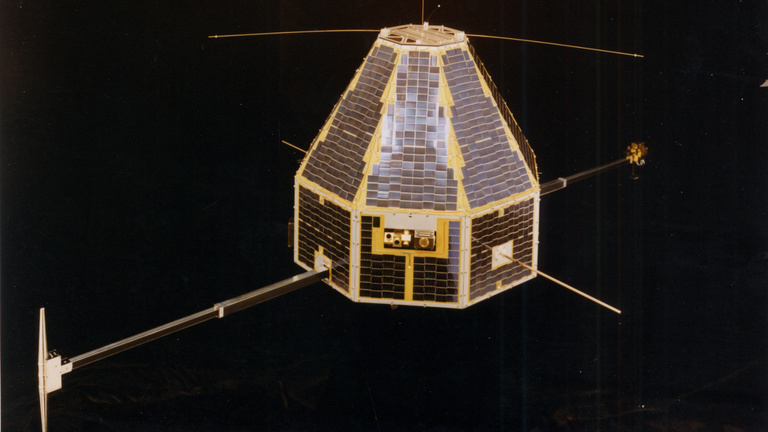 This spacecraft, also known as Explorer 52, was launched on June 3, 1974. It studied the interaction of the solar wind with the geomagnetosphere over the Earth's polar caps.

Several photos, illustrations and displays depicting the life and work of Dr. Van Allen can be viewed in the west lobby (Dubuque Street entrance) of Van Allen Hall during normal building hours. 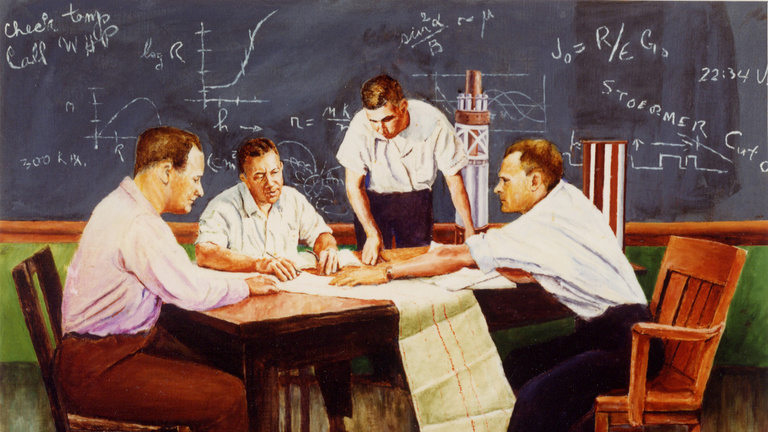 Among the items in the display is the 1958 painting "The Moment of Discovery" by Iowa artist Robert Tabor, loaned by the Van Allen family. After meeting with Van Allen and three of his associates, Tabor worked from photographs to reconstruct the "moment of discovery" of the radiation belts that surround the Earth outside its atmosphere.

Learn more about the history of Space Physics research at the University of Iowa that began with Van Allen and continues today.

U.S. Satellite, Explorer 1 -led to the Discovery of Radiation Belts

Many made significant discoveries in space physics